The Newsletter of the Winthrop Papers Projects: Number 5, 2004

Published by The Massachusetts Historical Society 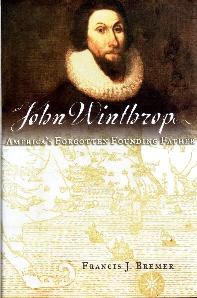 Drawing on over a decade of research as Editor of the Winthrop Papers, Dr. Francis J. Bremer has published the first full-length biography of John Winthrop, and the first study of the Massachusetts governor to pay serious attention to his life in England prior to the Great Migration. The book was published by Oxford University Press in May 2003 and has been very well received.

"His deeply learned book is so rich in physical description and offers so many subtle and surprising intellectual insights that it should appeal even to readers whose eyes otherwise glaze over reading about 17th-century theology. You might say that the times are so well described that we are carried through the life.... He has marshaled his deep knowledge of the 17th century to give us a new, passionate, moderate and community-centered Winthrop."--Minneapolis Star Tribune

"... a rich and detailed account of Winthrop's life. The research is thorough, the writing clear and at times even elegant." Carla Pestana, William and Mary Quarterly

"Bremer's most formidable research is into Winthrop's family background and his youth in the Stour Valley, a region in eastern England dominated by Puritans, which probably became Winthrop's model for the government of Massachusetts decades later." Caleb Crain, The New York Times

"[An] accomplished biography, a work of patient and devoted scholarship and of measured and persuasive judgement." -Blair Worden, Times Literary Supplement

"Bremer has drawn contemporary and later sources into a continuous narrative, and made an important contribution to early North American history. British readers for whom the first part of the 17th century means the Caroline divines and the poetry of George Herbert will be reminded that there were other equally honourable aspects of Christian life at this time.' -Church Times

"The biography that John Winthrop deserves.... Mr Bremer attempts to drag the Winthrop story out of the mists of 17th century Puritanism. He also presents a flawlessly researched academic argument for reinstalling him as one of the true founding fathers of modern-day America. It was perhaps his 'City on a Hill' sermon, which set the most enduring moral blueprint for the country. Certainly then, John Winthrop's is a story that deserves to be told" -Suffolk Journal

"Bremer creates an appealing portrait of Winthrop as a leader and as a man of religious faith.... nicely presented ... and exceedingly well-researched and footnoted.' -The Sun (New York)

"Bremer's diligently researched work is the definitive landmark study of its subject."-Booklist

"An impressive, scholarly analysis of the life of John Winthrop."--Library Journal

"In his 1630 sermon 'A New Model of Christian Charity,' John Winthrop provided the defining and enduring metaphor of America as the 'City Set on A Hill.' Too long has the person behind the vision been lost to the obscurities of 17th century Puritanism. Frank Bremer has now restored him to his rightful place as the first founding father in the American pantheon."--Peter J. Gomes, Pusey Minister in The Memorial Church, Harvard University

"In this remarkable biography of John Winthrop, Bremer brings to life the English society that shaped John Winthrop's character and purpose and the colonial society that was in turn shaped by him. A major contribution to the field of puritan studies."--Carol Berkin, Baruch College and The Graduate Center, CUNY

"Bremer, editor of the Winthrop papers, draws on those papers to add tremendously to our understanding of this pivotal figure, eloquently reminding us in a rich, magisterial biography how much Winthrop contributed to the founding of the colonies.... Bremer's definitive biography gracefully portrays Winthrop as a man of his time, whose influence in the new colony grew out of his own struggles to establish his identity before he left England."--Publishers Weekly

"A richly researched life of the Massachusetts Bay Colony's first governor, arguing that the Puritan leader was more moderate than history has conveyed.... One of Bremer's great achievements is to add flesh to the previous, skeletal portraits of Winthrop's life in England before he sailed West in 1630.... This scholarly makeover adds considerable color to Winthrop's wan cheeks."--Kirkus Reviews

"This is a splendid work, not afraid to take sides with its subject, but always judicious and sensitive to the context of a life spent in two continents. Bremer's study has wider implications than one man's career; he has thrown a flood of light on the beginnings of the Anglo-American world." --Diarmaid MacCulloch, Professor of the History of the Church, Oxford University

"Bremer's comprehensive biography of Winthrop rests on prodigious research in both English and American sources and is a fitting climax to a productive academic career." -Mark Noll,* *First Things

"... an eminently readable book, which is at the same time a work of great scholarship." Michael Zuckert, Claremont Review of Books

"... the care and astonishing thourghness that characterize the book make it persuasive even when dealing with some of the knottiest issues in the historiography of New England.... It is hard ... to imagine this voilume being superseded any time soon." -\Stephen Innes, Reviews in American History

"Bremer's writing style is flowing and engaging, and the vivid descriptions throughout draw the reader into Winthrop's world, as do the imaginative vignettes that open each chapter. Bremer contextualizes Winthrop in a fresh, convincing, and comprehensive way and does much to improve and expand the previous assessments of Winthrop by Edmund Morgan and Darrett Rutman." -- Linford Fisher, Fides et Historia

"Bremer's biography is the best and most thorough study of the man that we have to date. ... In sum, Frank Bremer has written an excellent book that establishes a highly effective and empathetic inerpretation of Winthrop's career...." -\Richard S. Dunn, The New England Quarterly

"This superbly written and researched biography offers a deep understanding of the impact of the first forty years of his life in England and his decision to seek and create 'a godly kingdom' in the Americas.... This is an important book for both studetns of English and American history. Not to be missed." -\Margaret Brown, Historical Association On-Line Newsletter

"... an exhaustively-researched, insightful, and engaging study which is essential reading for any serious student of Anglo-American puritanism in the sixteenth and seventeenth-centuries and the early settlement of Massachusetts." -\Simon Middleton, Renaissance Studies

Following the publication of his book Dr. Bremer has traveled far and wide to discuss Winthrop and make the case for his importance as a founding father. Following a book launch in June at the Massachusetts Historical Society he preached a lay sermon on "Faith of a Founder: The Social Gospel of John Winthrop" at the First and Second Church of Boston. The talk was broadcast on C-SPAN's Booknotes and is available on tape from C-SPAN. Over the summer Bremer spoke at Plimoth Plantation and on Fishers Island, which had long been a home of members of the Winthrop family. In the Fall he offered papers at the University of East Anglia and Oxford University in England. During the Spring of 2004 he delivered a talk on "Remembering and Forgetting John Winthrop and the Puritan Founders," as part of the Old South Church (Boston) lecture series, and delivered a talk to the members of Winthrop House at Harvard University. He also wrote an "Ask the Author" essay on "Would John Adams have called John Winthrop a 'founding father'?" for the e-journal of Early American History, Common-Place ( http://common-place.org (http://common\-place.org/) ).